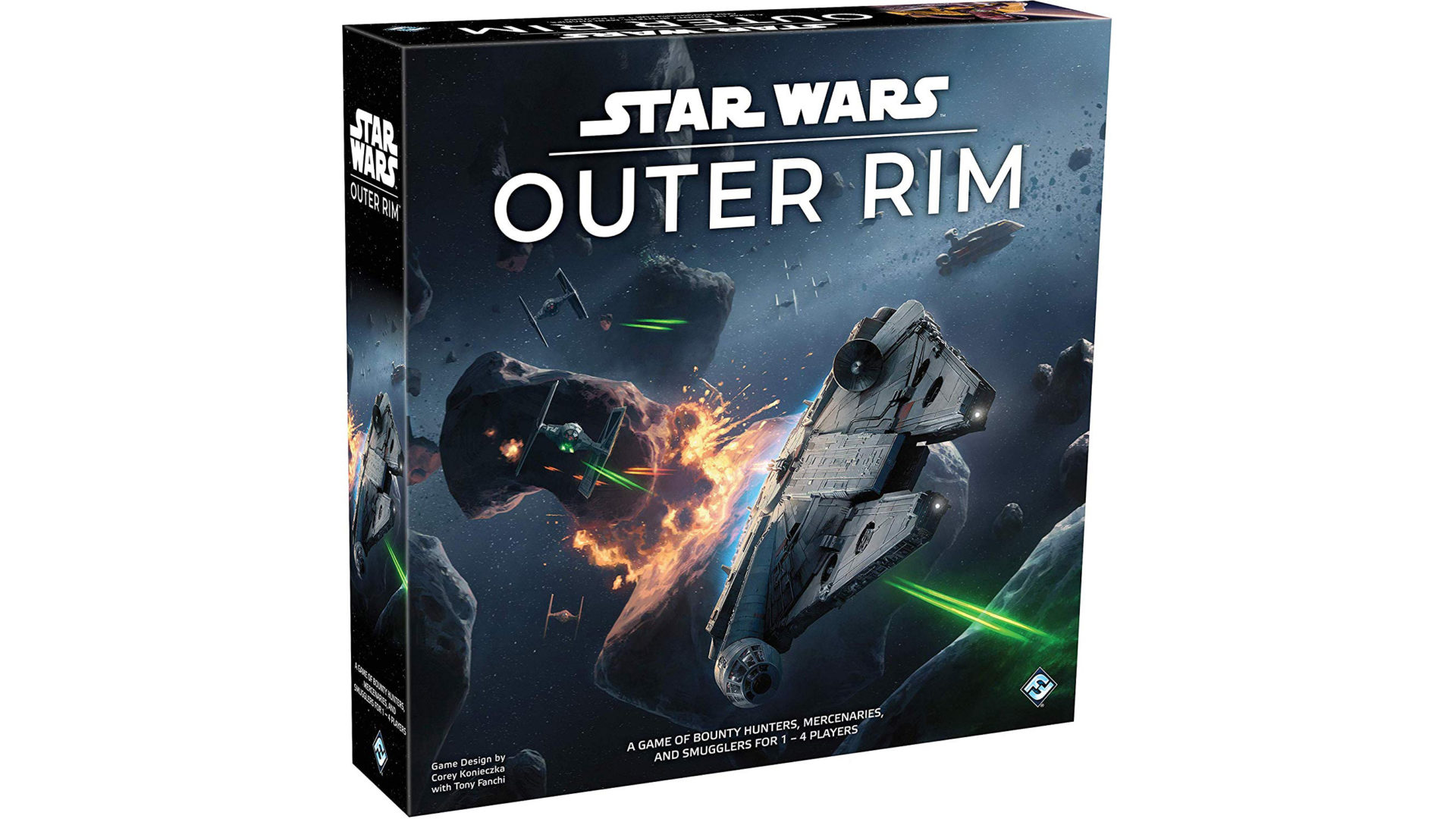 So what was this year’s release? Star Wars: Outer Rim. It’s a sandbox adventure game that puts you in the boots of a bounty hunter/mercenary looking to score some credits and, most importantly, fame. Let me tell you about it…

Avoiding the central core, your aim is to travel around the planets in the Outer Rim of the Star Wars galaxy completing jobs for money and fame. The first player to 10 fame wins.

On your turn, you typically fly to a planet in your ship, acquire a card from the market there and then have an encounter. There is a varying market of cards available wherever you are that include:

You start by doing something easy (deliver some cargo, complete a simple job), get some credits, spend them to upgrade your ship and crew and then take on some tougher jobs.

Encounters are drawn from different decks that correspond to your location and comprise random events that provide you with choices and tests.

How to tests work? Essentially, you roll some dice and look for certain ‘success’ symbols. Your character has certain starting skills (eg. tech, stealth, strength) and you can gain more skills by acquiring crew. Each skill you have that matches the requirement of the test increases your chance of success.

It’s a simple system that functions well enough, but (like combat – see below), it can be quite swingy. You can spend a couple of turns gearing up for a test only to fail due to an unlucky roll of the dice. Fortunately, you can usually retry the important ones on your next turn. You’re just wasting time.

If you catch up with your bounty or you meet one of the faction patrol ships roaming the galaxy, you may end up in combat. Your ship has different stats from your character, but essentially the appropriate attack stat determines how many dice you roll and you just need more successes than your opponent (one of the other players rolls dice for whoever you’re fighting).

There’s a nice reputation system, which tracks how the various factions (Imperials, Rebels, Hutts, etc.) feel about you. If they don’t like you, you will end up in combat with their ships quite a lot. Even if they’re neutral towards you, they can still slow you down when you encounter them, so increasing your reputation with the factions can be very helpful.

The big strength of the game is the theme. There’s plenty of story and flavour text on the cards and being so free-form, you really feel like a bounty hunter roaming the galaxy, earning credits where you can. If you’re looking for a Star Wars adventure, this game has it in spades.

However, my fellow gamers and I had a few issues with the game. They’re not insurmountable, but you should definitely be aware of them. The biggest one is probably the downtime. When it’s not your turn, there’s nothing to do. In a four-player game, that means you’re not playing for 75% of the game!

Can’t you spend your time planning what you will do on your turn? This is made very difficult by two things. Firstly, the market cards keep cycling in the middle. There were several turns where I had planned to buy one or two items, but by the time it got round to my turn they were gone and other items had appeared in their place.

Secondly, many of the encounters are unknown until you draw the card. The idea is that you read the card out so everyone can follow along with your story, but then the player typically has to make some decisions and take some tests.

Another issue is the swingy-ness of the dice. Of course, dice can be swingy in any game, but good games usually provide a way of mitigating the risk. Later on in the game, some of the equipment cards allow you to do this, but early on, you can feel woefully subject to the whims of the dice gods.

The final issue we had was one of variability. The decks of encounter and market cards are rather small at the moment and cards usually go to the bottom of the appropriate deck once they have been resolved. Some cards just kept popping up again and again. I saw one particular card four times in a single game!

How can you overcome these issues? Being a Fantasy Flight game, you can bet on expansions being released in short order. These will quickly bulk up the decks of cards and solve the variability issue. Before long you’ll be swimming in cards if you go all-in on this.

The downtime can be reduced significantly by simply playing with fewer players. I’d actually recommend two players for this one. Turns will come round quickly and the market won’t change much between your turns. You’re not interacting much with other players anyway, so only having one other player won’t really affect your game very much.

In terms of the swingy dice, I think you just have to accept that one. It’s an adventure game and sometimes the winds of fate will fart in your face. As long as you’re mentally prepared, it’s manageable.

Have you had a chance to try it yet? What do you think?